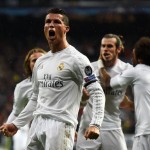 Reports have emerged claiming that Real Madrid hat-trick hero Cristiano Ronaldo was buzzing after their Champions League win over Wolfsburg.

The Portuguese international superstar produced one of the great performances of the competition.

“We knew that we had to score three or more goals. It was an intense game, but we had it under control. We were more intense and had more chances on goal. We were the better team,” he said.

“There’s always mass vibrancy on Champions League nights. The players feel differently too and that’s why it was a perfect night for us.

“I said that it would be a magical night. The team were in good form and so were the fans.”

Ronaldo added: “It’s not the most important game I’ve played. Despite the three goals, I’ve had better games. People know that I always give everything. The numbers don’t lie. I know that when you work hard, the results come. God helps those who work hard. I’m going home to bed now and I feel great.”

Manchester City To Launch £40 million Bid For Higuain And Gago