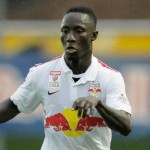 It has been revealed that Arsenal are reportedly keeping tabs on Red Bull Salzburg midfielder Naby Keita.

SportNet is reporting the 21-year-old has caught the attention of Gunners boss Arsene Wenger with his performances for the Austrian outfit this season.

It is understood Arsenal have sent scouts to watch Keita in action as they consider making a move for the Guinea international this summer.

Keita, who recently signed a new five-year deal with Salzburg, has scored 10 goals in 23 appearances this campaign. Walcott : Fabregas Will Stay With Arsenal!