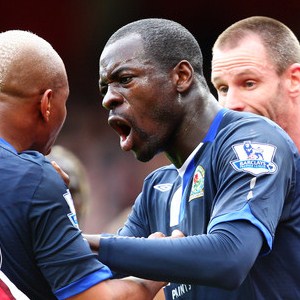 The Republic of Congo international was influential in Saturday’s 1-1 draw at Eastlands.

The towering central defender also made a last-minute goal-line clearance to deny Jo a winner and said: “You know what is happening at Manchester City with them spending big money and massive wages.

“But football is more than that, you have to believe that you can achieve things and we have shown it today.

“Of course it is normal that to attract the best players they have to pay the big wages but I think team spirit is something you can’t buy. It has been very hard work from the manager at Blackburn to bring the players together and now we have been together a couple of years we showed today how important desire and team spirit really are.

“That is the same no matter who you are and how much money you have got.” Yaya Toure Wants To End His Career With Manchester City