Reports are out claiming that Real Madrid midfielder Sami Khedira has agreed to join Arsenal. 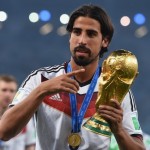 The German international was also wanted by Chelsea, where former Real coach Jose Mourinho was keen on a reunion.

However, Sport reported that Khedira already has agreed personal terms with the Gunners.

The World Cup winner will soon sign a four-year Arsenal contract worth €10 million-a-season.

Khedira is inside the final year of his Real deal and has felt undervalued by management since Mourinho’s departure.

Real boss Carlo Ancelotti has convinced Khedira to stay, but it’s all too late for the German, whose mind is now in London.

Real will seek €25 million for the midfielder.