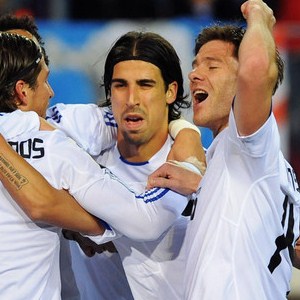 It has been revealed that Real Madrid midfielder Sami Khedira will be out for two to three weeks after damaging a thigh muscle in Tuesday’s 1-1 Champions League draw at Lyon.

Real Madrid sources said that a scan revealed the extent of the damage to the German international’s left thigh.

The former VfB Stuttgart could now miss the Champions League last-16, second leg at home to Lyon on March 16.

Jose Mourinho Wants To Remain With Real Madrid Next Season