It has been reported that Real Madrid midfielder Sami Khedira is eager to join Arsenal. 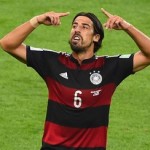 The Mirror reported that Khedira is pushing for a move to Arsenal, according to reports in Spain.

The German international is reported to have rejected a contract offer from Real Madrid.

Furthermore, they indicate the 27-year-old is keen to swap Madrid for north London and join compatriots Mesut Ozil and Per Mertesacker at the Emirates.

With only 12 months left on his deal Real may well encourage him to leave rather than lose him for free in a year’s time.

Karim Benzema : My Best Is Still To Come!