Reports are out claiming that Samir Nasri insists Manchester City have the bottle to haul in Premier League leaders Chelsea. 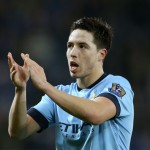 Boss Manuel Pellegrini questioned his side’s character after watching them blow a two-goal lead at home to struggling Burnley on Sunday.

However the former Arsenal midfielder said : “Yes, we all know what happened before and it’s an example for us.

“We know what we need to do, what not to do as well.

“We learn from our mistakes. I don’t know how many points we were behind United at this stage – we finished 11 or 12 behind them.

“But I know this will not happen. All we want is to win the league again – and we’ll do everything possible to do it again.

“Everyone is stronger. We get older, we get more mature and stronger mentally. You learn to deal with different situations.

“At this club we’ve been through all the different situations. We know how to deal with the pressure.

“We know that we are good at being second and chasing someone. We’ve done it before. We know how to deal with every situation and we are ready for it.”

Adebayor : Manchester City Will Be A Genuine Title Contender Next Season!