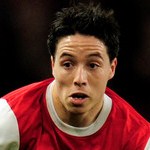 It has been revealed that Samir Nasri is not pushing for an exit this month from Arsenal.

The Guardian has reported that the French international star has told team-mates that he is relaxed about whether he stays or goes this summer but his conviction to leave has hardened in recent days and the situation has fuelled the feeling of unease behind the scenes at the London club.

There is now an acceptance at the club that if and when City formalise their interest in the midfielder with a sizeable offer, in the region of £25m, they would be wise to accept, particularly as the player wants the transfer.

Nasri, who has stalled on signing the new contract on offer at Arsenal, which is worth £90,000 a week, knows that he could take home as much as double that at City.