Samir Nasri Ready To Return To Action For Arsenal 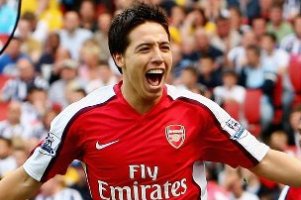 Midfielder Samir Nasri has handed Arsenal a major boost by revealing that he is ready for a first-team return.

The French international midfielder has been out since breaking his leg in pre-season training but could be back in action this month.

He added that he is due to rejoin the Arsenal team this weekend, or at the start of next week.

He also said that he strongly believes that he will be back in action against West Ham on the 25th.

Nasri also said that Arsenal’s new style of play suits the team. He said that Fabregas now has a bit more freedom in midfield, and the rest of players link up well with him.

The only bad news for Arsenal is that William Gallas suffered two smashed teeth during France’s 5-0 win over the Faroe Islands on Saturday and the centre-back is a doubt for the clash with Austria tonight.