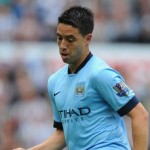 It has been reported that Manchester City midfielder Samir Nasri could make his return from injury after being named in the squad for Wednesday night’s match against Newcastle.

The former Arsenal midfielder has been out for a month after undergoing groin surgery.

City boss Manuel Pellegrini said he was now “working normally” and was in contention for the League Cup tie.