Reports are out claiming that Chile manager Jorge Sampaoli admits he’s gambled with the fitness of Arsenal star Alexis Sanchez this week. 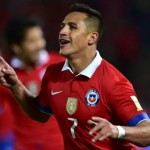 Sampaoli has admitted that he played Alexis for 90 minutes against Brazil despite knowing he was an injury risk.

He limped out of the Gunners’ 3-0 win over Manchester United before heading out to join up with his international teammates last week.

“Alexis arrived not at his top form, with pain in the adductor,” said Sampaoli.

“He couldn’t play at 100 per cent but we thought that for us him not playing was to give too much advantage to our rivals because his presence in our team makes things difficult for our opponents.” Lukas Podolski : I Want To Be Successful At Arsenal!