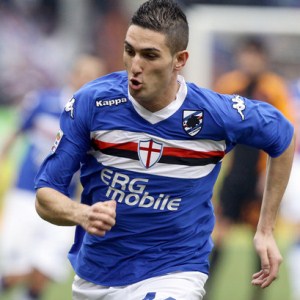 Sampdoria were gifted a 2-1 home win over Roma when visiting Brazilian defender Juan had a second half to forget.

Roma, who took the lead in the first period thanks to a powerful run and shot from Mirko Vucinic, looked comfortable until substitute Juan underhit a backpass and compatriot Julio Sergio could only bring down Angelo Palombo.

The goalkeeper was dismissed without protest and Nicola Pozzi blasted in the resulting penalty on 58 minutes.

On-loan Manchester United forward Federico Macheda came on for his Samp debut and went close with a header before Juan failed to clear a ball in the box and former Roma winger Stefano Guberti nipped in to score an 84th-minute winner.

Sampdoria, who had defenders Stefano Lucchini and Daniele Gastaldello sent off for second bookings late on, moved up to eighth in Serie A.

Roma, whose sale should be finalised in the coming weeks, can be overtaken in fourth if Palermo win at Chievo later or Juventus and new signing Luca Toni win at third-placed Napoli in the late game of a full programme.