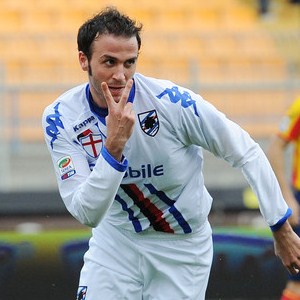 Sampdoria president Riccardo Garrone has revealed that there was little he could do to prevent Giampaolo Pazzini from moving to Inter Milan.

The Italian international striker was sold for €12m plus full ownership of Jonathan Biabiany on Friday and is the second top star to leave Samp during the January window after Antonio Cassano joined AC Milan.

“For some time there had been too many siren calls around Pazzini and he fell for them,” said Garrone.

“He was also influenced by the desire to step up on the career ladder. We were not the ones to get rid of him.

“I hoped the siren call would not return, but that is what happened.”

The fans were furious at Pazzini’s departure so soon after Cassano and have announced protests at this latest loss.

“I have to tell you, we could not continue with Pazzini in the squad. I act as the director general, have capable and trustworthy collaborators.

“The situation is very fraught and a lot is weighing on the club right now. This is not a threat, but if that weight should become too much, then it would only become known after the fact and it would be too late.

“I am not Luciano Moggi, I will not change football, but we continue like this. If the fans want to take over the club by buying up shares, then the door is open.”