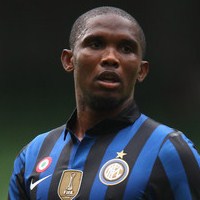 The agent of Samuel Eto’o has revealed that he expects the Inter Milan striker to join Anzhi in days.

Italian giants Inter Milan confirmed they held talks with the Russian club this week and it’s widely believed a deal is only days away worth €40m.

FIFA agent and intermediary Peppino Tirri told Calciomercato.it : “It looks like we’re on the right path,”.

“New meetings between the clubs? I think they will come after Monday. Now let me rest for three days!”