It has been reported that Chelsea striker Samuel Eto’o wants to stay in London. 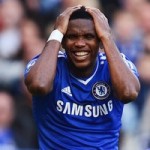 The Cameroon international is leaving Chelsea as his contract winds down next month, but isn’t ready to quit Europe.

Indeed, The Sun says Eto’o hopes to stay in London next season and would love to join Arsenal or Tottenham.

The former Barcelona and Inter Milan star has also been contacted by Juventus in the past week.