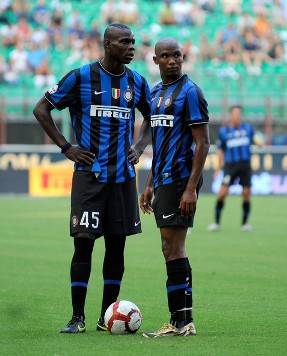 Balotelli set up Eto’o with a back heel for Inter’s first goal and then scored the Nerazzurri’s second with a blistering free-kick.

The youngsters efforts helped Inter Milan to a 2-0 win and more importantly qualification for the second round of the Champions League.

Speaking after the game, Eto’o told reporters that at the beginning of the game and after the interval he tried to give Balotelli some advice.

Eto’o said that Balotelli is very young and does not always succeed in managing certain situations but was fantastic in the match and that he was perfect. Agent : No Talks With PSG For Thiago Motta