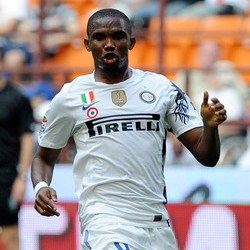 Inter Milan striker Samuel Eto’o has declared that he is committed to his club.

Reports have surfaced that the Cameroon international striker would consider his future after suffering racist abuse in the city this week.

After reading the stories, the player himself has released a statement to the Nerazzurri faithful on the club’s website.

“This morning I was very surprised, as I expect you were, to read the reports in some of the newspapers, in particular La Gazzetta dello Sport,” the statement read.

“I want to be very clear, as I have always been throughout my career and with you, the fans, who have shown me so much affection and respect from my very first day in Milan.

“Don’t worry – my only thought is winning, alongside my teammates, the Coppa Italia, which would be the sixth trophy in two years and the third this season.

“Nothing that happens away from the pitch, though it may upset me as a man, can drive me away from Inter.”

Materazzi : Mario Balotelli Is My Friend!