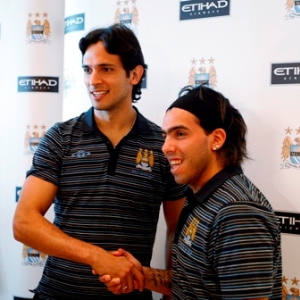 Manchester City striker Roque Santa Cruz has revealed that team-mate Carlos Tevez will “stick it out” at Manchester City despite his desire to return to Argentina.

The former Manchester United striker, who signed a five-year contract with City in 2009, has admitted of his dissatisfaction with life as a footballer in recent times and the fact the his family still lives in Argentina.

Santa Cruz, however, expects Tevez, 26, to honour his contract at Eastlands before returning to his homeland.

Santa Cruz told the Cadena Ser radio station that : “His heart is with his family,”.

“He wants to be with his people and they are in Argentina. His brothers and also his daughters are there.

“When one feels that his homeland is calling he may do anything to go back, but I think he will stick it out and complete his contract with City before going back home.”