Reports are out claiming that Arsenal midfielder Santi Cazorla claimed that the Gunners entered the clash with Manchester United with a changed mentality following their midweek disappointment against Olympiakos. 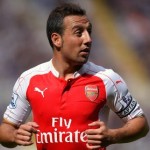 The Spanish international put in an impressive display and he was largely responsible for controlling the midfield and dictating the tempo of the 3-0 win against United at the Emirates.

He said on Sky Sports: “It was important for us today, we played together and very well.

“We have to keep up the same level. We know they have got really good players with Schweinsteiger, Carrick, Mata, Rooney.

“We needed to believe after the defeat against Olympiakos, we needed to change the mentality.

“The team was very compact and focused against a big team.”