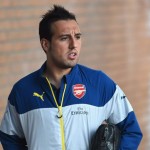 Reports are out claiming that Arsenal midfielder Santi Cazorla admits they’re lucky to be in the FA Cup final.

The Spanish international said: “It was difficult, always. We played against Reading and [we know] from the game last year against Wigan that it’s not easy to win the game. The team tried until the end of the game and now we have to play the final.

“We want to win for the fans. It’s always special to play at Wembley and we have a good opportunity to get the title. Now we have to wait for the other team – Liverpool or Aston Villa.”