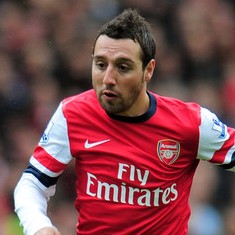 Arsenal midfielder Santi Cazorla has revealed that he enjoys facing different styles of play in the Premier League.

The Spanish international even enjoyed the physical battle of Stoke City.

“Lots of people told me about Stoke, with their long throw-ins, and that the ball would be in the air all the time,” he told the Daily Mail.

“There are teams who build their game around the physical aspect.

“Against Everton last week, a lot of the play was based around getting the ball up for Fellaini. It’s as physical here as I imagined it would be, but it’s great football.”