Reports are out claiming that Arsenal attacker Santi Cazorla has admitted his excitement at the prospect of playing alongside French striker Karim Benzema. 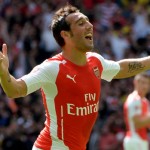 Speaking with Spanish radio station CadenaCOPE, Cazorla said: “I´m not very aware on whether there is any interest or not.”

“The manager knows it better than anyone. Benzema is a great player. Every side would like to have him but I think the manager already has his team made and probably he is not looking for another striker.”

“Benzema fits into any team. The good players fit well in every side. He has quality and would adapt great.”

Real Madrid star Benzema continues to be linked with a massive £46million move to Arsenal but it appears unlikely that any transfer will occur.