It has been reported that Santi Cazorla has declared his commitment to Arsenal. 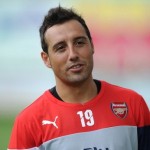 The Gunners having spent £63m on Alexis Sanchez, Calum Chambers, David Ospina and Mathieu Debuchy this summer, the 29-year-old midfielder has high hopes for the season ahead.

The Spanish international said: “My objective was always Arsenal. I have played for Arsenal for two years and I continue to play for Arsenal. They are the only club I think about. I want to lift as many trophies as possible with Arsenal and help them as much as I can.

“Winning the FA Cup took a lot of pressure from us. Winning a trophy after nine years relieves you, and leaves you to play with a bit more freedom. It is easier then to play even better than the year before. We would like to win trophies this year again.”

Arsenal’s Alexis Sanchez Battling To Be Fit For Liverpool Clash