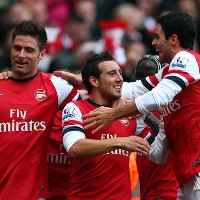 It has been reported that Arsenal midfielder Santi Cazorla enjoys playing with Mikel Arteta in the Gunners engineroom.

The former Malaga star was quick to praise his fellow Spaniard Arteta, particularly for helping him settle so quickly at the Emirates Stadium.

“There is a reason he is the vice-captain of the team: he is a reference player in the dressing room,” Cazorla said.

“He has helped me a lot.

“He knew I was a new signing, that it would be a positive experience for me but that I would also need time. He has had a calming effect on me.

“He has shown his confidence in me, and it is clear that Mikel has been key in my adaptation because he has always helped me.”