Reports are out claiming that Mesut Ozil has hailed Arsenal teammate Santi Cazorla for his contribution this season. 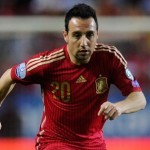 Cazorla has been integral in Arsenal’s upturn in fortunes since the turn of the year and it would be safe to state that the Spaniard has been one of the Gunners’ best during the current campaign.

The 30-year old’s contribution to the north London club this season has certainly not gone unnoticed and now teammate Ozil has hailed the diminutive star.

“[Santi and Alexis] are the type of players that, like myself, think before things happen on the pitch,” Ozil told Arsenal Player.

“Especially with Santi, you can see that he’s playing such an outstanding season for the team and he’s so important for us.”