Reports are out claiming that Santi Cazorla has highlighted the importance of Arsenal continuing to play in a commanding manner. 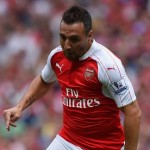 The Gunners made it back-to-back 3-0 wins when they defeated Watford at Vicarage Road on Saturday.

The comfortable win backed up the 3-0 triumph over Manchester United last time out and the Spanish midfielder has implored his teammates to kick on and maintain the lofty standards as the season progresses.

“I was a difficult game and a very good win for us. We are second in the league and we need to keep the play at the same level,” he told the club’s official website.

“[Watford] played the long ball and they have very good and strong players in front of them, but we came together and it is very important for us to beat these teams and we are very proud of the team.

“We played against Manchester United last time and it is a different game. They have very good players but today it was physical and with the team it is the most important thing to play well.

“We need to keep this level for the future.”