Reports are out claiming that Arsenal midfielder Santi Cazorla believes that the Gunners need to buy a specialist striker in order to mount a serious challenge for the title. 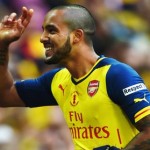 The Spanish international also believes that Theo Walcott is not an out and out striker and wants Arsene Wenger to invest in that position this summer.

He said: “When it comes to a position or who in particular we might need, somebody in Theo Walcott’s area.

“He is not necessarily a true, true striker so we might need somebody in his area.” I Have Nothing To Prove To Arsenal – Benik Afobe

Lukas Podolski Given The Green Light To Face Republic of Ireland