Santi Cazorla has admitted that he is excited about this season’s wide open title race. 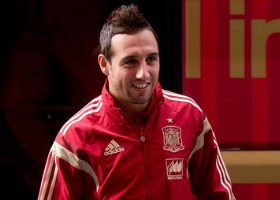 The Spanish international told the Daily Mail: “In Spain it’s Madrid and Barcelona miles ahead of the rest, while in England there is Arsenal, Tottenham, Manchester United, Manchester City, Chelsea and Liverpool. There are not many points between us. Southampton are there, too.

“But a team like City can also go to Sunderland and lose. That’s the strength of the league.”