Reports are out claiming that Arsenal midfield maestro Santi Cazorla has identified defence as one of the key areas for the club next year. 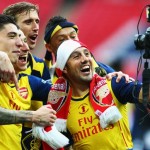 The Spanish international believes a strong defence can win titles for the Gunners.

“One of the key areas we have to focus on next season is being a very strong defensive team,” he said. “If we have got those things under control our offence is already good enough.

“We need to make sure that the positioning of our backline is strong and always stays that way.

“Last season we lost so many points against small teams at home, and if we want to win the league we can’t lose those points.”

Arsenal, who finished third in the Premier League, had the third best defensive record in the division last season behind champions Chelsea and seventh-placed Southampton.