It has been reported that Arsenal midfielder Santi Cazorla says Spain teammate Xabi Alonso is wrong over claims Spain “lacked hunger” at the World Cup. 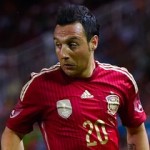 However he insists he wasn’t spoiling for a row with the Real Madrid midfielder.

“We did not win the games [against the Netherlands and Chile] but there was no lack of hunger, ambition or desire,” he said.

We have no doubt on Xabi Alonso or any other team-mate. There is no polemic here.”