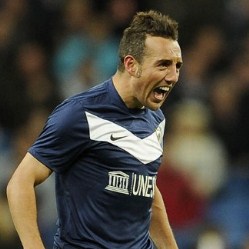 Interesting transfer news are out claiming that Santi Cazorla is in line to make his Arsenal debut in Germany.

The Sun reported that the Spanish international flew to Germany with his new Arsenal team-mates last night — and is set to complete his £16million move from Malaga today.

It is now said that the 27 year old will make his debut in the friendly clash against Cologne on Sunday.