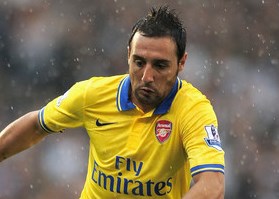 It has been revealed that Arsenal midfielder Santi Cazorla has pencilled-in the Barclays Premier League trip to West Bromwich Albion a week on Sunday.

The Spanish international star has missed the Gunners’ last four matches in all competitions due to an ankle injury.

Answering questions on Thursday via Arsenal’s Twitter account, the 28-year-old former Malaga midfielder said: “I will be fit maybe in one week; I hope I can play at West Brom.”

Alex Oxlade-Chamberlain : Walcott Is Faster Than Me!