It has been reported that Santi Cazorla would love to see Arsenal sign Spain teammate Andres Iniesta. 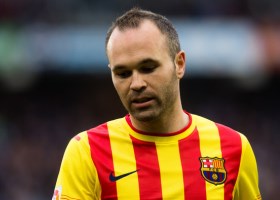 Given his choice of any of his international teammates, the 29-year-old admitted he would rather Iniesta swapped Barcelona for north London.

Asked by Sport360 which player he wanted at Arsenal, he said: “Andres Iniesta, there’s no player like him.”