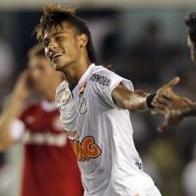 Santos, upset 2-1 by Bolivia’s The Strongest at high altitude in La Paz three weeks ago, have three points from two matches.

The Strongest lead the group with six points after they also beat Juan Aurich of Peru last month. Inter have three points and Juan Aurich none.

Neymar, Brazil’s big hope for the 2014 World Cup, converted a penalty to give Santos a 1-0 halftime lead at their Vila Belmiro ground before exploding after the break with two superb goals.

In the 54th minute, he picked up the ball in his team’s half and dribbled his way past three defenders before steering it past goalkeeper Muriel at close quarters.

Inter striker Leandro Damiao pulled one back 10 minutes later, but within two minutes Neymar had completed his treble, his speed on the ball leaving two defenders in his wake before he chipped over Muriel.