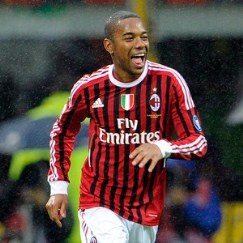 Reports have emerged that Barzilian club Santos is interested in bringing Robinho back to the club from AC Milan.

Buoyed by the securing of Neymar to a new deal, Santos president Luis Alvaro Ribeiro has declared they now want to re-sign the former Real Madrid winger.

“We will do everything possible to ensure the thought of Robinho returning to Santos can turn into reality,” said Ribeiro.

Robinho’s deal with Milan expires in 2014.