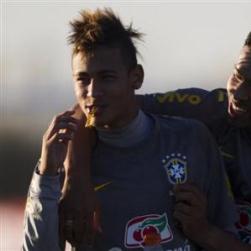 The president of Santos, Luis Alvaro De Oliveira, is adamant his star striker Neymar will not leave the club until next year at the earliest.

De Oliveira told radio programme Al Primer Toque: “Rosell has asked me about Neymar, but we do not want to sell him, at the earliest, until next year.

“I have spoken to Rosell, he is an interesting and elegant man, like Perez. I met him at the farewell for (former Brazil and Barca striker) Ronaldo. Neymar is not only wanted by Madrid, he is of interest to Barcelona, Chelsea, Juventus, Paris St Germain. It is normal.

“There will always be dialogue, but we want Neymar to fulfil his contract with Santos.”