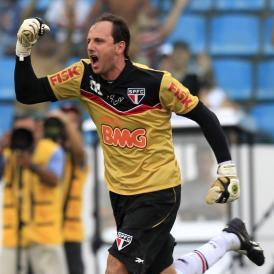 Goalkeeper Rogerio Ceni scored the 100th goal of his career to give Sao Paulo a 2-1 win over arch-rivals Corinthians in a pulsating Paulista championship derby marred by three red cards on Sunday.

Rogerio, who holds the world record for goals scored by a goalkeeper, placed a free kick in the top right corner nine minutes into the second half to put Sao Paulo 2-0 up.

The 38-year-old former Brazil goalkeeper, a reserve when his country won their record fifth title in Asia in 2002, was booked for taking off his jersey as he celebrated.