Interesting transfer news are out claiming that Sao Paulo midfielder Paulo Henrique Ganso is set to move to Napoli. 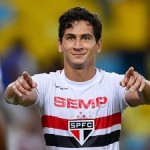 UOL Esporte reported that the two clubs are in advanced talks over Ganso’s transfer with an agreement imminent.

Significantly, Napoli have reportedly agreed terms with the Sonda group, who own 68 per cent of Ganso’s contract.

The 24 year old Brazilian international has long been linked with a move to Europe, having been admired by former Manchester United manager Sir Alex Ferguson among many of the game’s heavyweights.