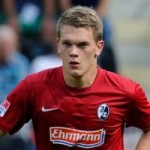 It has been reported that SC Freiburg have played down claims that Matthias Ginter is set to move to Arsenal.

Recent reports emerged claiming that the 19-year old midfielder, who can also operate in defence, was set to join the Gunners for a little over £6million but Freiburg sporting director Jochen Saier has denied that speculation.

Saier told Badische Zeitung : “That’s nonsense. We have not received an inquiry and there are no thoughts about selling him,”.