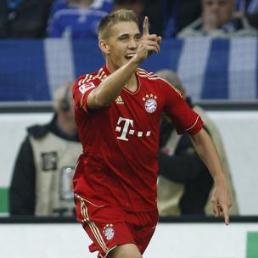 Bayern Munich won their eighth straight game and kept their eighth successive clean sheet as they beat Schalke 04 2-0 away on Sunday to go top of the Bundesliga.

Nils Petersen, standing in for injured topscorer Mario Gomez, put them ahead and Thomas Mueller pounced on a defensive blunder to add the second.

The last goal they conceded, and only one in 10 competitive games this season, was in their 1-0 defeat at home to Borussia Moenchengladbach on the opening day of the Bundesliga season on Aug. 7.

They top the table with 15 points from six games, two ahead of Werder Bremen and Borussia Moenchengladbach with Hoffenheim a further point back in fourth.