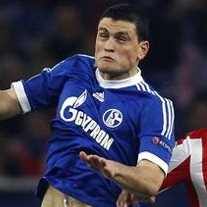 Christian Fuchs fired Schalke into the last 16 of the Champions League as the German side beat Olympiacos 1-0 in their Group B clash at the Veltins Arena.

Schalke went into the game knowing a victory would see them progress with a game to spare and Fuchs’s long-range strike earned the home side all three points with 13 minutes remaining.

And, with Arsenal’s 2-0 victory against Montpellier also seeing the Gunners through to the knock-out stages, Olympiacos will have to be content with third place in the group and a place in the Europa League.

Klaas-Jan Huntelaar went into the match in a rich vein of form having scored in each of his four Champions League appearances so far this season.