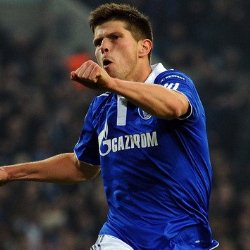 Klaas Jan Huntelaar hit a hat-trick as Schalke overturned a two-goal aggregate deficit to storm into the UEFA Europa League quarter-finals with a 4-1 win over FC Twente.

Steve McClaren’s men looked set to progress when Willem Janssen scored in the 14th minute in the Veltins-Arena to extend the one-goal lead the Dutch side had carved in the first leg.

But Huntelaar struck a 29th minute equaliser against his compatriots, and Schalke dominated the second period as they completed their emphatic comeback in style.