Reports have emerged claiming that Liverpool, Manchester City and Arsenal are circling Schalke for Leroy Sane. 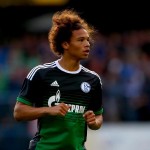 The exciting midfield talent has attracted enquiries from all three Premier League giants ahead of the January market.

According to BILD, Schalke chief Horst Heldt is comfortable with the situation, having secured Sane to a new deal in July. The midfielder’s wages jumped from €1.5 million-a-year to €2.4 million-a-year. And in exchange, Sane’s management agreed to include a bumper buyout clause in the contract.

Heldt is being pushed to negotiate Sane’s sale for January.

However, Schalke’s board know they can maximise Sane’s value by waiting until the summer and his expected involvement with Germany for Euro 2016.

Arshavin : Goal Against Barcelona Was Not Difficult!

Liverpool Closing In On Aston Villa Goalkeeper Shay Given Arsenal Boosted By The Return Of Laurent Koscielny