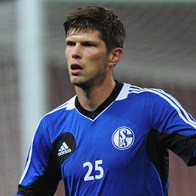 Reports are out claiming that Schalke have told Arsenal to forget about trying for striker Klaas-Jan Huntelaar.

Arsenal boss Arsene Wenger — promised funds following last week’s £150million sponsorship deal with Emirates — is hoping that a January bid of £6m may be enough to snare the 29-year-old frontman.

However the Germans’ general manager Horst Heldt has goaded the Gunners by claiming they cannot afford the Hunter.

Heldt said: “There have been no offers or any sign of Klaas-Jan leaving.

“If someone comes to us six months before the expiry date, and has a lot of money, we will deal with it.

“But from Arsenal circles we hear there is no money anyway.”