It has been revealed that Schalke deny reports of Arsenal making a deadline day bid for Klaas-Jan Huntelaar. 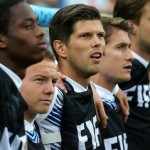 “There was no approach from Arsenal or from any other club,” Horst Heldt was quoted as saying by Kicker.

“Klaas-Jan is part of Schalke’s core. We can definitely see him sign a contract renewal here.

“He is a great player, an absolute modern professional. He’s always hungry for success and wants to achieve his goals.”