Reports are out claiming that Schalke sporting director Horst Heldt insists Julian Draxler has not been the subject of a bid from Juventus. 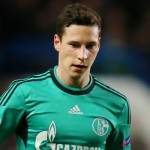 The German international midfielder who is wanted by Arsenal, has been linked with Juve this week.

“If Juventus want him, then things can move forward,” Heldt told Kicker.

“We haven’t received an offer, and if we did then we’re in a position to reject it. In any case, we’ll worry about that when we get an offer.

“We want to play fair, Juve asked us if they could speak with Julian, and we said yes with confidence.”