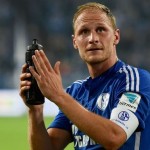 The talented Germany international has been linked with a big club move to England, where Arsenal, Liverpool and Tottenham have been mentioned as potential destinations.

“It’s no secret that Benedikt Höwedes has the ability to leave through an exit clause in his contract,” conceded Heldt.

“Nothing has yet been decided, but he will surely do so in a timely manner. We’d like to keep him. For economic reasons, we must in any case be willing to be separated from any player. ”

This summer, Howedes can leave Schalke for €17.5 million, while for next year’s transfer window, the defender can leave for €12.5 million. Wenger Admits Attack-Minded Midfield Was The Undoing Of Arsenal

Barcelona Not Interested In Selling Cristian Tello To Arsenal