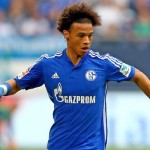 Reports are out claiming that Arsenal have found Schalke’s asking price for Leroy Sane too rich.

The Sun revealed that the German club have slapped a £40million price tag on the 20-year-old as his stock continues to soar across Europe.

But that price is believed to be too big for the Gunners.

Sane, a tricky winger, has impressed after being thrust into first-team action in the Bundesliga this season.

Barcelona, Manchester United and Manchester City will now reportedly battle it out for his signature.