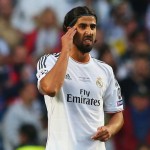 Khedira recently announced his intention of leaving Real Madrid when his contract expires at the end of the current campaign and as a result, a host of clubs including Arsenal, are lining up to secure his services.

Schalke have also been mentioned as one of Khedira’s potential destinations next season but sporting director Heldt has urged the fans not to get their hopes too high.

“We are not the only club interested in signing Khedira,” Heldt told Sport Bild.

“Decisions on individual players do not depend on whether we get into the Champions League. As we have always done, we will assess whether a transfer of this calibre is even realistic.

“In the end, there are obvious things that speak to our advantage and other things that talk to other clubs’ advantage.”