Reports are out claiming that German club Schalke have dropped their interest in Newcastle United target Xherdan Shaqiri. 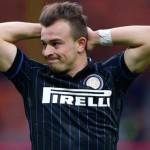 The Magpies now lead the chase to sign the Swiss international, who only joined Inter Milan from Bayern Munich last winter, after previously being linked with Stoke City and Everton.

Schalke coach Andre Breitenreiter revealed to Sport Bild: “Shaqiri is not of interest to us at the moment.”

“We don’t even have meetings with him on our schedule.”

Newcastle has already signed the likes of Chancel Mbemba, Georginio Wijnaldum and Aleksandar Mitrovic this summer and are looking to make one more key signing before the season commences this weekend.